Home » Blog » Discussion » What Soccer Ball Do Players Use in the Champions League?

Tuesday and Wednesday evenings are days when some of the most exciting soccer games take place.

You see, this is when the most successful teams of the previous campaign face off against each other in fiercely contested battles for glory on the pitch.

The UEFA Champions League has been part of the lives of soccer spectators for many a season.

But even with that familiarity present, a number of questions pertaining to it do tend to arise.

One of these – which I’d also like to talk about – concerns the type of soccer balls that players use within this competition.

Because the UEFA Champions League is separate from the traditional league format that teams usually participate in, there are slightly different rule sets and guidelines that govern this competition.

And that also includes the sort of soccer balls that are stipulated.

So, I’ll start with a straightforward answer…

Each season, players involved in the UEFA Champions League use a variation of the Adidas Finale soccer ball. This ball always maintains its Adidas Finale signature name branding for each year, with the exception of number suffixes placed at the end of the name to denote every particular edition of the competition.

Now, let’s delve a little further into this topic.

What does the Champions League soccer ball look like?

These colours are expertly blended together to convey a soccer ball that appears as though it’s on fire whenever it rolls along the grass! 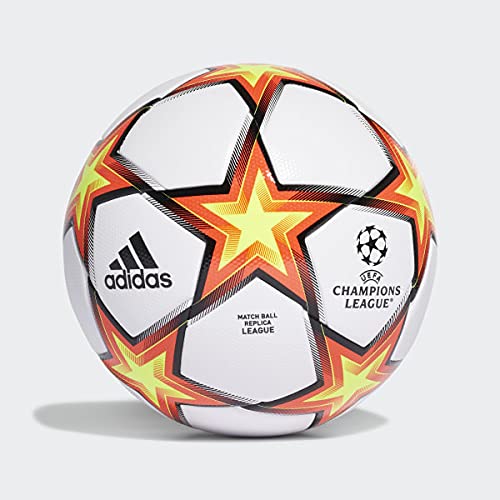 What’s also interesting is that this soccer ball has another name – the Pyrostorm.

According to FourFourTwo, this ball is going to be used in the group stages of the competition, whilst a different adaptation of it will be unveiled for the final game.

Here’s a short video presentation of this ball:

Which size of soccer ball is used in the Champions League?

Size 5 versions of the Adidas Finale are used in the Champions League.

This is because size 5 is the official soccer ball size that is used for many competitive leagues across the world.

Ultimately, the same rules apply to this competition too.

You can check out my other article for further reading on all the different sizes of soccer ball.

How many panels does the Champions League soccer ball have?

The construction is certainly quite eye-catching, as the external pattern incorporates some of the stars that make up the look of the official UEFA Champions League logo.

Massive credit must be given to Adidas as the developers, largely because they’ve managed to craft together something iconic.

Now before I provide you with the answer to this particular question, I want you to be aware of a tiny back-story.

Firstly, traditional soccer balls used to be recognised by their black and white design, as the combination of pentagons and hexagons formed a truncated icosahedron structure.

This is why 32-panel soccer balls became the golden standard for a number of years.

However, after Adidas took over from Nike as the company with the contractual obligation for manufacturing UEFA’s match balls, panel numbers on soccer balls began to shift.

Which brings me back to the question…

The Adidas Pyrostorm Champions League soccer ball for the current 2021 – 2022 soccer season has an approximate total of 22 panels. These consist of an estimated 15 regular hexagonal shapes as well as 7 uniquely coloured stars.

It’s actually quite difficult to tell the exact number of panels because the latest designs of Champions League soccer balls have each panel overlapping one other for improved durability.

So, if you’re interested in reading more about the changes in soccer ball panel design that took place from 2004 to the present, stick with me!

How many stars are on the Champions League soccer ball?

I had already mentioned this at some point earlier on in the article, but it doesn’t hurt to give a quick recap!

The Champions League ball for this season has approximately 7 stars on it.

We arrive at this figure by performing the following sequence:

It’s not really rocket science but it gets the job done!

When did soccer ball panel design begin to diversify?

For years the appearance of soccer balls remained largely similar.

But at certain times in history there were significant shifts in panel design that I wanted to bring to your attention.

It wasn’t until Adidas begun to exercise their creative freedom in 2005, that a raft of soccer ball aesthetic changes came to the forefront of the sport.

That year, the company came up with the Adidas Teamgeist ball which was then used in the 2006 FIFA World Cup.

What was quite fascinating about this soccer ball at the time, was that it only had 14 curved panels that were thermally-bonded together as opposed to being hand-stitched into formation.

Check out the image below for an illustration of what it looked like:

Adidas stepped up their game once again in the 2009-2010 season by releasing another distinctly different soccer ball design.

This time, the panels replicated the appearance of the UEFA Champions League’s very own star-ball logo.

“The design of the Finale Madrid celebrates the ten most recent UEFA Champions League finals, including this season’s, with the exclusive motif from each of these showpiece matches being drawn in gold inside one of the characteristic star panels of the ball.”

So, this style of soccer ball was brought about to commemorate the competition’s illustrious history.

Finally, we have the Adidas Finale 19. 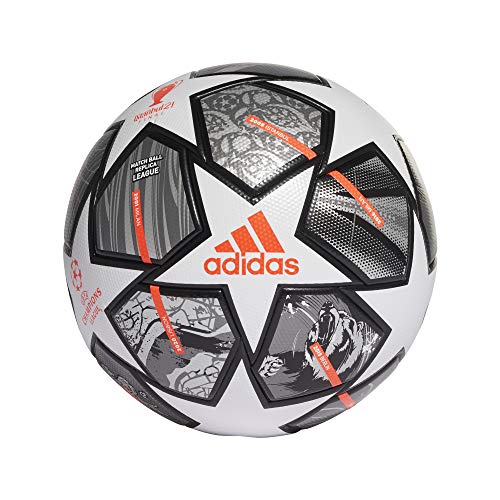 The genesis of overlapping panel design took place here, with Adidas succeeding as they managed to develop another innovative feature that improves how long their soccer balls last.

I hope this post has really enlightened you on the soccer balls that have been used in the current and previous editions of the UEFA Champions League.

Have you been enticed into buying a soccer ball?

If your answer to that question is yes, I’d highly recommend that you tickle your fancy with a look at some Adidas balls.

See you next time!