Home » Blog » Discussion » What Is a Glider Soccer Ball?

Soccer has come a long way over the last couple of decades.

As fans and consumers, we have access to a wide range of products and accessories that can greatly enhance our playing experience.

But one way or another, a soccer ball is required in order to make things happen.

The professional superstars that you see on television don’t really have to worry about where to source their soccer balls from, as all their gear and equipment needs are taken care of by the clubs that employ them.

On the other side of the spectrum however, causal soccer fans are left with the difficult choice of picking out a soccer ball from the plethora of options available.

It’s by no means a straightforward choice, and because budget constraints are a significant factor for a lot of people, buyers generally tend to go with purchasing the soccer balls that are much more affordable.

So, that brings me on to the topic of Glider soccer balls.

A Glider soccer ball is a low-cost soccer ball that is available to purchase at a much cheaper price point than professional match standard alternatives. Simple design and inexpensive materials are incorporated into their construction, in a way that many soccer players around the world really appreciate.

Glider soccer balls have become a major part of the amateur soccer game landscape, especially because their overall performance is more than satisfactory when compared against other professional specification balls that cost two, three or even four times as much.

Adidas is the manufacturer that brought the Glider soccer ball series to market.

The company is one of the biggest players in the sports gear industry and they’ve been one of the major pioneers for soccer ball development over the years.

For example, they were the ones who created the first black and white soccer ball, which would go on to enhance the television viewing experience for spectators who couldn’t make it to the stadium.

Adidas actually released the first iteration of a Glider soccer ball in 2013 – with the organisation unveiling a green and yellow coloured ball for the 2013 FIFA Confederations cup.

Here’s how that one looked:

From then on, the Glider series has expanded to include many different versions.

I’d like to review some of the best ones now, so continue reading if this is something that you’re interested in learning more about. 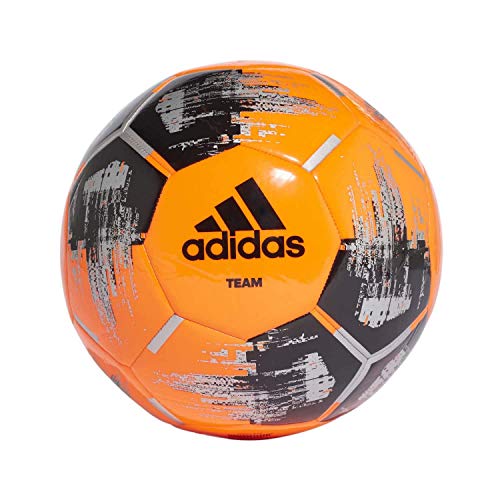 The Adidas Men’s Team Glider soccer ball is a hard-wearing ball that was designed for players who are looking for a good training ball that they can use on a regular basis.

You’ve also got the choice of three different colourways here:

It comes in three different soccer ball sizes – 3, 4 and 5 – so as a buyer you have all the flexibility that you can ask for because you can choose the size that matches your own needs.

With a thermoplastic polyurethane (TPU) cover, machine-stitching and a nylon-wound butyl bladder inserted for optimal air retention, you can rest assured that this ball was designed with durability in mind.

Furthermore, because of its robustness you are unlikely to experience any performance issues when using it on a soft grass field, precisely because its sturdy design makeup makes it a good fit for use on such a playing surface.

Because the outer material is so smooth, this ball rolls along the ground quite quickly and it can be a little bit of a challenge for a goalkeeper to grab hold of it when it moves at speed.

Although that’s what makes this ball so good for the price it’s listed at.

One thing to note is that this soccer ball is shipped in a deflated state, so be sure to have a soccer ball pump at hand when it’s delivered.

The Glider 2 soccer ball was an update on the 2017 Glider ball, being made available for purchase two years after the latter had been released.

It boasts less conventional colour sets that players would associate with traditional-looking soccer balls, as white, red and black combinations are present in the one pictured above.

This newer model of Glider soccer ball is said to have improved from its predecessor when it came to the aspects of perceived and actual grip.

Because the older Glider’s outer cover looked and felt so smooth to the touch, a lot of people complained that it was too slick and difficult to gain control of.

Where this model is said to be a step up relates to the way in which its presentation has been overhauled.

Each individual panel has a rougher feel to it, and the boldness of the intersecting line graphics make the soccer ball look like it’s much easier to handle whilst it is in the air or along the ground.

Adidas does a good job of marketing this soccer ball as one that can immensely improve a player’s all-round skills in the game, and for a fairly affordable price point at that.

Check out the demonstration that I’ve embedded below, as it does a great job of showcasing how this ball performs.

Which other Adidas Glider soccer balls can one choose from?

There are some more glider ball options that one can look at.

Here’s what I managed to find…

The Adidas Telstar 18 glider soccer ball that was used in the 2018 FIFA World Cup knockout rounds in Russia is advertised as a glider, so I thought I’d include it as part of this article.

On the surface you’ve got a ball that’s made from a TPU cover, and you can see the results of its workmanship as the impressive panel design catches the eye.

Apart from the use of machine-stitching in its construction, this match replica is quite different to the previously reviewed gliders, particularly when you look at how it plays on the field.

The other glider soccer balls where characterized by excessive slickness which affected how the ball rolled along the grass, as well as how easily a player could gain and retain possession.

But this one offers an impressive balance in the way that it travels, making it a fine choice for people who are looking to sharpen their skills on the pitch. 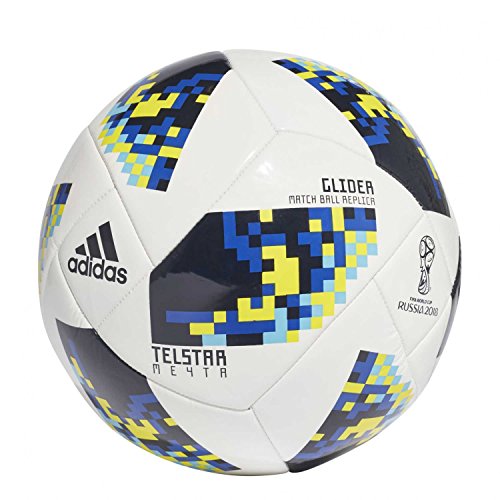 Last up we have this Nemeziz Glider soccer ball.

The name is catchy, and its appearance certainly raises eyebrows too.

It’s got a bright orange and black look to it, making it easy to stand out on a grass or synthetic playing surface.

One of the other colours incorporates the team crest and colours of Real Madrid – who are arguably the largest club in the history of the sport.

The ball offers the best possible air retention with a butyl bladder, although the fact that its machine stitched is a slight concern.

Nonetheless, you’ve got another solid glider option at a reasonable price point.

Why are glider soccer balls popular?

There are a couple of reasons why Glider soccer balls are used by casual players of different nationalities, cultural and religious backgrounds.

One of the first is the allure of owning a reasonably priced ball that’s made by the Adidas brand.

Let’s face it, Adidas has dominated several different facets of the sport.

From being the official FIFA World Cup soccer ball creators to sponsoring some of the world’s biggest professional teams like Manchester United and Bayern Munich.

Being able to get your hands on a soccer ball made by Adidas for a sum of money that doesn’t place a huge dent in your wallet is not something to ignore.

For confirmation of this, you can check out the prices of the top-of-the-range Adidas soccer balls in my product roundup, as that should give you a much better idea of how big of an investment is needed to own a professional standard ball made by this brand.

Another thing I’d like to highlight is that Glider soccer balls offer an almost unbeatable price-to-performance ratio, especially in comparison with other soccer balls on the market.

You will probably struggle to find a lower specification soccer ball that is as robust as a Glider for a comparable price.

This is because other smaller companies that compromise on the quality of the materials used to make their soccer balls – in the same way that Adidas do – struggle to deliver a good performance benchmark, likely either through a lack of resources or developmental expertise to be able to squeeze out as much as they can from a cheap template.

My verdict on Glider soccer balls is that they are good enough to buy if the soccer balls that professional players use are out of your budget range.

Adidas is a brand that you can back to deliver on performance promises in the vast majority of buying cases, so you can be relatively confident that a Glider soccer ball will suit your own personalised needs.

If you’re on the lookout for something outside of Adidas representation, take a look at my product roundup on the best soccer balls, as that article contains detailed reviews of other soccer ball brands that are worth considering.