Home » Blog » Discussion » What Gloves Does Keylor Navas Use?

Having plenty of height certainly isn’t a prerequisite when it comes to being an exceptional goalkeeper.

There are numerous instances where goalkeepers who were much shorter in stature went on to play for the biggest soccer teams in the world, as well as win the most prestigious trophies and individual honors.

But perhaps the best example of a goalkeeper known to have defied so many odds and obstacles is none other than Paris Saint Germain’s number one goalkeeper – Keylor Navas.

Originally from Costa Rica, the 35 year old is a three-time Champions League winner, along with being a Spanish league champion and a French Ligue 1 winner as well!

He’s unequivocally lived every young goalkeeper’s dream, having played alongside the likes of Cristiano Ronaldo at Real Madrid and Lionel Messi at his current employer; not to mention having represented his country at the 2014 and 2018 FIFA World Cups.

Due to the elite stature of the clubs he’s represented within Europe, he typically faces a lot of media spotlight from journalists and spectators.

This therefore raises the question of what goalkeeper gloves Keylor Navas uses during professional fixtures, especially for the younger contingent of supporters who aspire to be just like the Costa Rican international.

Quite surprisingly, the answer isn’t a conventional one.

In fact, Navas doesn’t sport any goalkeeper gloves made by the biggest sports gear and apparel manufacturers like Nike, Adidas or Puma!

Instead, he recently settled on a little known British brand called Sells Goalkeeper Products Limited that’s based in the town of Wakefield.

So, to put a swift end to all the suspense, here’s the reveal…

There have been quite a few occasions where he’s been spotted donning these gloves, especially most recently in Paris Saint Germain’s three-goal victory against Girondins Bordeaux on the 13th of March 2022.

If you’re keen on actual visual evidence, take a look at the video thumbnail as well as the included footage that’s been embedded below:

At the 21 second mark of these highlights you can clearly see the gloves Navas is wearing as he raises his hands and claps, in an effort to encourage his teammates to remain focused during the game.

Furthermore, right at the very end of the video (i.e. the 4-minute mark) you see Navas clapping again after the game has concluded.

You really get a good glimpse of the Total Contact Aqua Ultimate gloves from that point on in the video.

As an added bonus, take a look at the image below which shows Navas wearing these same gloves in a previous fixture against OGC Nice where the Parisians lost by a solitary goal:

Here he can be seen wearing the Total Contact Aqua Ultimate gloves whilst giving his goalkeeping compatriot Gianluigi Donnarumma a pat on the back.

What good would it be to highlight the goalkeeper gloves that Keylor Navas uses without giving readers an insight into the performance advantages that they offer, right?

Mr. Navas clearly swapped over from Adidas gloves to these ones for good reason.

First of all, it appears as though part of his previous endorsement deal with the company came to an end, as he was first spotted wearing them in a Ligue 1 fixture against Dijon.

Besides that however, there are a couple of features that provide a strong case as for why the Costa Rican made the switch.

Let’s take a look at them now.

In my article on what materials goalkeeper gloves are made from, latex was highlighted as the element that gives gloves the grip that goalkeepers need to catch soccer balls.

The latex used on these however, takes things to an even higher level of sticky brilliance.

Now, your typical glove latex will be great for grabbing onto soccer balls in dry conditions.

But what happens when the rain starts pouring down onto the pitch?

Catches that were so easy to make in the glowing sun become extremely difficult to make in wet conditions.

And that’s where the Ultra Magnet™ latex on these gloves shines through, as it’s built to deal with adverse weather conditions.

Holding onto the ball in the rain is a relatively straightforward task with these gloves worn, as the level of grip provided by the latex here is off the charts.

I’d even go as far as to argue that the latex is good enough to rival the gripping performance of the goalkeeper gloves that Manuel Neuer wears!

You know that unpleasant feeling you tend to get when you’ve been exposed to heat for a long period of time?

Sweat drips down your body and makes your clothes damp.

Yep, we’ve all been there.

The same sort of thing happens for goalkeepers when they wear their gloves for long stretches.

Hands start to get clammy inside, as the heat builds up within the gloves when they’re being worn.

Well, the good news is that these gloves have technology incorporated into their design that deals with temperature regulation.

So, your hands will be well ventilated during and after the game or training session.

The right amount of circulation within these gloves also gives wearers added comfort.

And on a slightly separate note, the wrist area of these gloves is extended with embossed neoprene material that is said to provide extra hand performance stability.

It’s always good to get an up close and personal look at products that you’re thinking of buying.

The video below does a great job of showing exactly how these gloves look like, especially when it comes to the finer details of the material.

Where can you buy Keylor Navas’ goalkeeper gloves?

Finally we have the million dollar question!

You can grab yourself a pair of these Total Contact Aqua Ultimate gloves directly from Amazon: 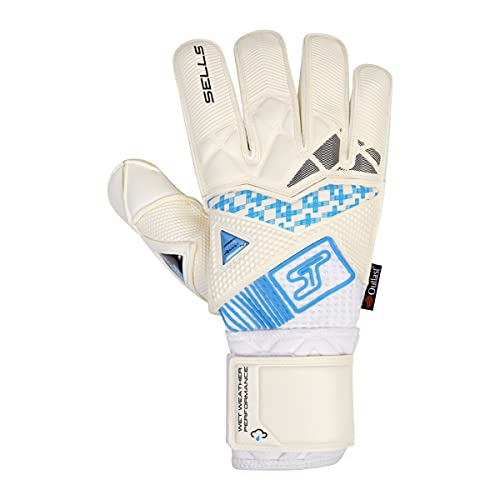 They’re readily available in size 9.5, 10, 10.5 and 11 so you don’t have to worry that your wrist will be too wide to fit as they’ve got numerous size options for you.

Alternatively, you can purchase this product directly from the manufacturer’s website.

A range of payment options are given at the checkout, including the choice to purchase with PayPal, Google Pay and Amazon Pay.

Keylor Navas is a fine shot stopper who has won many accolades over the years as a result of the hard work and dedication he put in towards perfecting the goalkeeping craft.

If so, you might want to have a look at our article on the finest goalkeeper gloves, as there’s some fantastic products worth prospecting in there!