Over the centuries, innovative technologies and inventions have allowed the human race to make advancements in their day-to-day lives.

From the automobile industry to the manufacturing industry there has been a significant improvement in the machines being used today that have come along with more efficient principles.

Take your household lightbulb for example.

Without the ingenuity of Thomas Edison, humans would still be relying on inefficient mechanics like gas lamps that utilize a depleting, non-renewable form of energy.

Innovations such as cars, trains, and mobile phones have advanced the different modes of transport as well as form new communication channels to connect with people across the globe.

On the matter of soccer, this article will unearth the exact time when goalkeepers started wearing gloves and discover the nature of goalkeeper glove regulations set during that time period.

Goalkeeper gloves were first introduced into the game in 1945. The first known patent was established in 1885 by a manufacturer called William Sykes, but it wasn’t until 1945 when an Argentine player called Amadeo Carrizo, was said to have become the first goalkeeper to wear gloves in a competitive soccer match.

With that out of the way, let’s delve deeper into the history of goalkeeper gloves and look at the progression in their development over the years.

The history of goalkeeper gloves

Before the advent of goalkeeper gloves in the 1960s and 1970s, goalkeepers never used to wear gloves and would just save shots with their bare hands.

Even though the first patent for goalkeeper gloves was formed in 1885, there was no mandatory requirement for goalkeepers to wear gloves and this created a lot of leeway for the men guarding the goal posts.

According to the original FA rules established in 1863, goalkeepers were free to make the choice on whether to wear gloves or not without facing any legal repercussions.

If you’re more interested in the FA rulebook formed in 1863, why not check out The Rules of Association Football 1863, which details all the rules of the game during that era.

Over the coming years, the use of goalkeeper gloves became more common and popular to use among goalkeepers, especially in the early 1940s.

Goalkeeper gloves then continued to develop well into the 1960s, where more goalkeepers were beginning to wear gloves, although the vast majority only used them in wet conditions.

Due to a lack of specialised goalkeeper gloves in the market, most of the goalkeepers were still using basic gardening gloves.

The 1970s proved to be a huge progression point in the manufacturing of specialised gloves, as more sports companies began investing in gloves that provided basic protection as well as sufficient levels of grip.

This development pushed well into the 1980s, where latex goalkeeper gloves started to gain further recognition within the market.

The aim of the latex gloves was to provide more durable and adhesive gloves that could be made in a number of different variations.

And finally, we move onto more recent times where goalkeeper gloves have become one of the standard pieces of equipment used in soccer.

Goalkeepers can now choose different types of gloves based on factors like grip, durability and seam types.

More so, high quality grade latex is now used to provide the best level of grip for goalkeepers to firmly catch the ball.

Here’s a short clip that illustrates this historical progression:

The first known patent for goalkeeper gloves was a British ball manufacturer known as William Sykes.

The patent itself was accepted for a pair of leather goalkeeper gloves in the year 1885.

These leather gloves were produced with a layer of Indian rubber on the external part of the gloves to provide basic protection and padding for the goalkeeper.

Which goalkeeper was the first to wear gloves in a professional match?

According to historical records, Argentina’s Amadeo Raul Carrizo is widely acclaimed to be the first goalkeeper to ever wear gloves in a soccer match.

This began with his career at River Plate in 1945 where he would regularly put on a pair of goalkeeper gloves before heading out for matches.

However, there has been some controversy over the years regarding whether Amadeo Carrizo really was the first goalkeeper to wear gloves.

Because another contender in this debate was the former Scotland goalkeeper Archie Pinnell, who was spotted in the mid-1890s wearing a basic pair of gloves.

Given the massive time gap between the two findings, it is still unclear as to who officially claims the title, especially given the difference in quality between the gloves that they were wearing at the time.

And yet another competitor is the former Wales international Leigh Richmond Roose – who was spotted wearing white gloves forty years before the emergence of Amadeo Carrizo in South America.

Roose was known for wearing his white gloves in bad weather conditions and openly admitted that in normal conditions he preferred to play bare-handed.

The true owner of this title can be attributed to various factors such as the standard of goalkeeping gloves as well as the reason for wearing them.

Ultimately, until today it’s still quite debatable as to who was the first goalkeeper to wear gloves.

What companies were the early manufacturers of goalkeeper gloves?

As mentioned before, the early 1970s proved to be a pivotal moment in the development of specialised goalkeeper gloves, as more sports firms targeted this newfound opportunity in the market.

Goalkeepers gloves manufactured by these four major sports companies proved to be influential in the game as they offered gloves with reliable protection and grip.

Here’s a bit of background information on each company…

They offer a full range of products for goalkeepers like gloves, socks and other relevant equipment.

As one of the first firms to launch their product range in 1990, they have become a key supplier in high tech equipment and they consistently manage to garner sponsorships from various professional athletes.

Reusch is German sports firm that manufactures equipment for soccer as well as winter sports like skiing.

Ever since their establishment in 1994, Reusch has gradually been improving their product line and they hit a significant milestone in 1972, when Gerbard Reusch claimed to have created the first modern goalkeeper glove in history.

Why not try out the Reusch Attrackt S1 Evolution Finger Support gloves – recommended by the one and only Hugo Lloris. 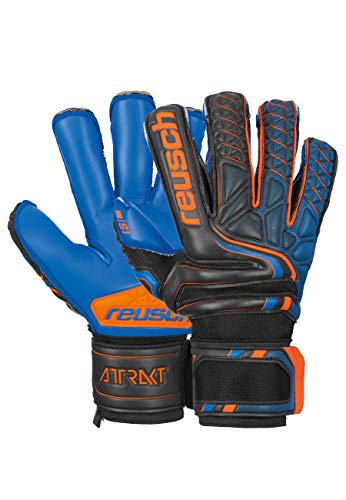 They’re a great pair for both beginners and professionals looking to take their game to the next level.

Uhlsport is another German founded company that has set itself up to become one of the top goalkeeper glove manufacturers in modern day soccer.

The firm was originally founded in 1948 and they have progressively advanced their developments to match the high standards at top-flight level.

They boast a number of sponsorships with various goalkeepers across many professional leagues and they’ve made a name for themselves as one of the leading brands.

If you’re looking for a solid pair of gloves that they stock, then why not check out the Uhlsport Next Level gloves that provide comfort and optimized cushioning. 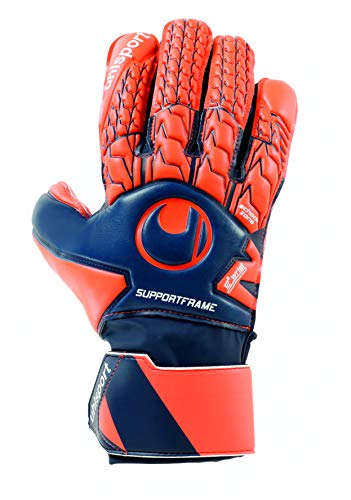 Lastly, Sondico is a top of the line British sports brand that was formed in the 1960s as a sports accessory manufacturer originally based in India.

As England’s top choice for goalkeeper equipment, Sondico has grown over the years and even managed to attract former England goalkeeper David James into a lucrative contract deal.

How did goalkeeper glove designs begin to advance over time?

Over the 1980s, goalkeeper gloves became a fundamental piece of equipment due to the demand of the sport and a general realisation that goalkeepers need basic protection for their hands.

I’ve talked about this particular point before in my article on why goalkeeper wear gloves, so you can check that one out in your spare time.

With how widespread the use of goalkeeper gloves became, manufacturers decided to focus on offering more variance in their designs to cater for the needs of professional goalkeepers across the globe.

And in order to develop different levels of grip, manufacturers also experimented with materials such as terry cloth, table tennis flooring and latex foam.

In the end, manufacturers proceeded with latex foam due to its superior physical attributes and composition.

You can have a read of my post on goalkeeper glove materials for further insight on this subtopic.

To summarize it all…

Goalkeeper gloves were first used in the year 1945, as the pioneer of this historic event is widely acclaimed to be the former Argentinian goalkeeper – Amadeo Carrizo.

Goalkeeper gloves are crucial in the modern game as they provide basic protection and grip for goalkeepers.

With the ever-changing demands of professional goalkeepers around the globe, manufacturers are constantly improving and adapting their research to provide the best gloves that they can possibly create.

Why don’t you go ahead and grab yourself a pair of the best goalkeeper gloves today!