Goalkeepers work really hard on the pitch to deny goals and scoring chances for the opposition, and at times they pay a strange price for their efforts.

You see, goalkeeper gloves tend to pick up unpleasant smelling odors as they go through their useful life cycle.

And one particular question that a lot of soccer players ask is why goalkeeper gloves smell, especially because they’re a piece of gear that’s washed after use quite regularly.

So, this article was written to provide a well-explained answer, starting with the most succinct version down below:

Goalkeeper gloves can smell because the owner failed to dry them for an adequate amount of time, resulting in a growth build up of bacteria and mold that in and of itself creates a terrible stench and damages the latex.

Well, let me expound on this further.

The cause of goalkeeper gloves smelling is relatively simple, as it essentially boils down to two factors:

I’ll talk about each factor in turn.

Have you ever washed your hair and gone to sleep even when you know it’s a little damp and could do with more drying time?

You probably know exactly what I’m talking about because the smell you’ll wake up to in the morning is faint but memorable!

In a similar way, goalkeeper gloves will start to smell foul if they’re put through the paces without being given enough time to dry out fully in a well ventilated area.

Most people think that if they stick their gloves out on a washing line for a couple of hours then they’re good to go.

Well unfortunately, this is far from the truth.

First of all, you shouldn’t even attempt to dry your goalkeeper gloves in the presence of direct sunlight.

The sun’s rays are too intense and you’re bound to dry them out excessively as the natural moisture of the latex gets stripped away.

You can have a read of this article that talks about some of the care procedures to follow with a new pair of goalkeeper gloves, as it really expounds upon the point mentioned above.

More so, to properly dry out your goalkeeper gloves you’re going to need pretty much an entire day’s worth of time.

Every last drop of water that found its way into the glove should either seep out or evaporate, and that won’t happen quickly, especially when direct heat factors like sunlight, radiators or hair dryers don’t play a part.

You can find bacteria almost anywhere within the Earth’s atmosphere.

These single-cell organisms are found in every sort of habitat on the planet, such as in:

It’s even contained within the water that we drink on a daily basis!

So, no matter which way you turn, bacteria can’t be avoided.

Human skin is covered in bacteria as well, which is where the issue of goalkeeper gloves smelling comes in.

Now, a lot of people believe in the misconception that sweat production is what causes goalkeeper gloves to stink.

Well, the truth is that it’s not the sweat that causes the stench, because it’s the bacteria which does the aromatic damage.

Goalkeepers are very active performers on the soccer pitch, as they have to move their arms and legs quite a lot in order to prevent the concession of goals.

When the hands of a player in this position are actively sweating inside the gloves, or when they make a move like wiping sweat from their forehead with their gloves on, they unknowingly irritate the bacteria that’s already present on their skin and gloves.

Bacteria love environments that are moist and warm in nature, and although bacteria can survive for extended periods of time without the former, it needs a source of water in order to grow and reproduce.

In a playing situation such as the one described above, sweat is the moisture catalyst that allows bacteria the opportunity to grow and multiply, which is what brings out those terrible smells.

How to keep your goalie gloves from smelling

Smelly gloves can be a nightmare to deal with, particularly when you’re not aware of a solution that works to effectively rid your soccer gear of foul scents.

Luckily for you, we know exactly how you can eradicate the problem!

Deodorizing sprays do an excellent job of clearing away any funky smells for our armpits, which is why they’re fantastic to use for goalkeeper gloves that have the same problem. 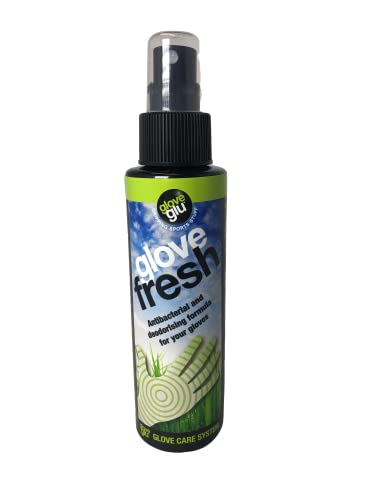 Instead of acting like a perfume based spray which would only mask any pungent smell, this tool specifically hammers down on the bacteria causing the unpleasant odors by directly eliminating the guilty microorganisms.

For the best results, you’re going to want to spray into each goalkeeper glove about two to three times, all whilst making sure you hold the spray canister as near as you can to the equipment.

After that, you’ll want to let the gloves air dry naturally away from direct sunlight.

Take a look at the super short video demonstration below that illustrates exactly how Glove Fresh works:

Another alternative is making use of what’s called isopropyl alcohol.

It instantly kills bacteria, so when you soak your goalkeeper gloves in this chemical solution for approximately one minute, all the germs “meet their maker” so to speak.

Once you’ve completed the soak, carefully rinse the gloves with water to get rid of the solution; perform a normal glove wash and a recommended air dry and you’ll have a smell free pair.

This article has covered why goalkeeper gloves smell, outlining the two main reasons for this phenomenon and giving readers a step by step outline of how to eradicate these unpleasant odors.

If you’ve enjoyed this piece, then you should definitely have a look at this roundup post on the best goalkeeper gloves.

After all, without a pair how can you expect to comfortably perform on the pitch?