Home » Blog » Discussion » What Goalkeeper Gloves Does Jan Oblak Use?

Atletico Madrid can count themselves considerably blessed to have had Jan Oblak as their number one shot-stopper for close to a decade.

The Slovenian joined the Spanish side from Benfica in 2014, and since then he dramatically stepped up his game to the level where he’s consistently in the discussion for being amongst the world’s best goalkeepers.

In 2020 for example, he set a new La Liga record; becoming the fastest goalkeeper to record 100 clean sheets in the competition, managing this feat in only 182 professional league appearances!

On a separate note, if you ask many sports fans about the soccer teams they support, they’ll tell you that they enjoy watching an underdog story and seeing “a minnow club” prevailing against the biggest sides.

Now don’t get me wrong, Atletico Madrid are a club of considerable sporting stature.

They manage to qualify for the UEFA Champions League each season and are typically in and around the top three places within their domestic league.

But Oblak and Atletico Madrid cannot compare to the prestige of clubs like Barcelona, Manchester United or Real Madrid.

Which is why when players like Oblak do well on the pitch – making numerous saves in the process – it’s quite understandable to see a lot of fans seeking out the sort of gear that helps facilitate Oblak’s spectacular performances.

That’s why in this article, I’ll be looking at the specific goalkeeper gloves that Jan Oblak uses.

Atletico Madrid and their players certainly don’t receive as much press coverage as the traditional giants of soccer, so it’s not that easy to find out what gloves he wears due to the scarcity of such information present online.

But that’s where this post comes in to save the day!

Where’s the evidence, you ask?

Well, take a look at the training photo he tweeted out a couple of months ago:

You can clearly see the PUMA logo embroidered onto the blue-coloured gloves he’s put on.

And this image is backed up by more recent footage.

In the frame down beneath, you’ll see Oblak on the ground after making two acrobatic saves in succession to prevent Manchester United from scoring in a UEFA Champions League Last-16 clash at Old Trafford on the 15th of March, 2022:

Notice the black colour with orange highlights, and the noticeable PUMA logo.

And then compare that to the gloves illustrated in the picture below:

These gloves are not just aesthetically appealing.

They offer a lot of on-field benefits for goalkeepers, particularly because of the way in which they’ve been meticulously designed.

Here are some standout features of the PUMA Future Z 1 Grip Hybrid gloves:

Sports gear manufacturers have clearly begun to respond to the changing demands of the consumer market, evidenced in how they’re creating products catered to deal with the tasks that athletes encounter.

Goalkeepers need to clear soccer balls away from danger, which often happens when crosses and other sorts of set pieces are launched aerially into the 18-yard box.

Punching the ball away is one of the methods that goalkeepers use to relieve pressure for their teams, and these days the vast majority of gloves come with in built silicone to cushion the contact impact when these punches are made.

These gloves are no different.

Present on them is a dedicated silicone punching zone that serves to enhance a goalkeeper’s punching power when they clear the soccer ball out.

You get greater distance on these punches, which is really effective from preventing goals conceded as the further away the soccer ball is from the penalty area, the less of a chance the opposition has to breach the defense and score.

If you look carefully at some of the finer details of these gloves, you’ll notice that the latex padding partially wraps around each thumb to provide greater latex-to-ball contact.

You see, latex is a material used in the making of goalkeeper gloves that gives players the necessary grip to hold onto the soccer ball after it’s been caught.

Because these gloves already have 4 millimeters of sticky grip latex fitted onto the palms, the designers thought they’d amplify overall grip even further by extending the latex covering to wrap around part of the thumbs.

What this does is give goalkeepers more flexibility when it comes to how they position their hands and arms when attempting to make a save.

Instead of trying to grip the ball with an entire palm, a goalkeeper can instead initiate a full on grab with their finger tip or thumb because the latex-to-ball contact is enhanced by the stickiness of the thumb wrap.

Ultimately, goalkeepers have an easier time catching soccer balls because of this.

3. Zip opening on the wrist

Unlike other modern goalkeeper gloves, these feature a sleek-looking zip opening on the wrist area.

PUMA states that the purpose of this design is to provide a customized fit with adjustability, so you should probably take their word for it!

To get a broader view of how these gloves perform in a real-life playing environment, then I’d suggest you take a look at the review footage below:

Where can you buy Jan Oblak’s gloves?

These gloves look so good that I wouldn’t fault you for being tempted to make an impulse purchase!

If the urge to whip out your wallet is too strong to resist, then consider the following retail options:

They’ve got nearly any product you can possibly think of!

You can pick up these PUMA Future Z Grip 1 Hybrid gloves by clicking the button below: 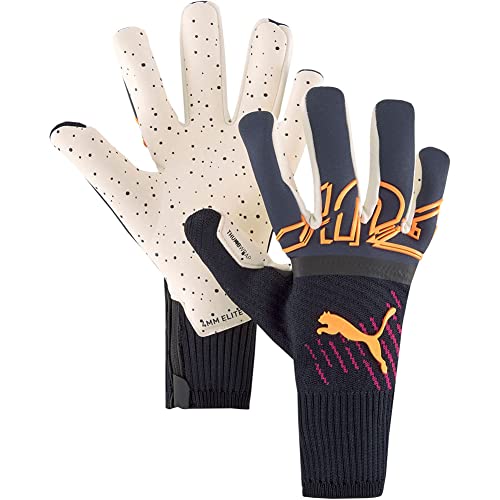 Additionally, there are some alternative colourways that you might find interesting:

If you’ve previously read any of my other articles on the gloves professional goalkeepers use – like my post on the gloves that Manuel Neuer wears – you’ll already be aware of this online soccer store.

They’re based in Pasadena – a city within California – and have been selling soccer-related gear for a number of years.

Pro Soccer has two glove options for you to choose from:

You can click on each image to be taken to the respective product page.

The Atletico Madrid shot-stopper puts on a personalized pair of PUMA Future Z Grip 1 Hybrid gloves, as seen from the visual evidence this article has provided.

Before you go, check out our article on the best goalkeeper gloves.